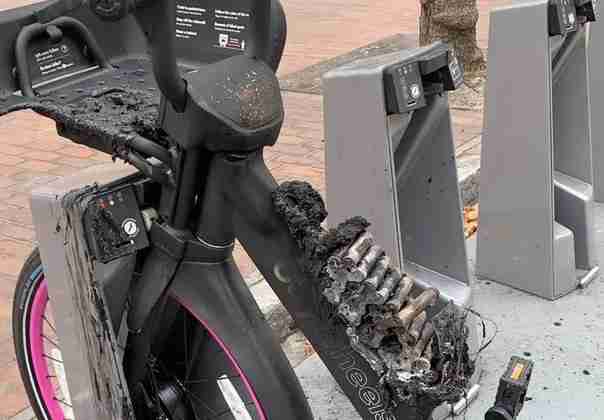 Study: E-Scooters take heavier environmental toll than busses with high ridership because of the raw materials and manufacturing process in China. The electricity used to charge the vehicles is one of the smallest contributors to the product’s emissions. LINK

Women are reportedly rejecting Lyft for failing to handle harassment despite its ‘woke’ image. Lyft has lost their trust because the app makes it difficult to report driver harassment. Women who filed complaints said they were sent to a chat app, where they could only interact with artificial intelligence. LINK

Just two months after returning to San Francisco streets, Lyft has pulled more than 1,000 e-bikes from the city after multiple vehicles caught fire. The company said it is investigating whether the vehicles have been tampered with, and that is has seen increased vandalism in the Bay Area. No other cities have seen similar issues. LINK

One week after beginning operations, half of a Bratislava shared e-scooter service’s fleet was stolen. However, the thieves were found within a few hours thanks to the police and GPS locators. LINK

Ohio State partners with Lyft to replace the free, university-operated Safe Ride. Ohio State will offer 10,000 discounted safe night rides per month through the Lyft app with a $5 discount per ride within the designated Columbus campus service area. LINK

English man turns his disability scooter into a taxi for late-night drinkers. Local cab drivers are furious saying “It goes around 20mph and I bet he doesn’t have a license. It is totally illegal.” And they had seen “about five people hanging off the side”. LINK

A Lyft driver refused to be the getaway car for a Chattanooga woman who stole a Juul from a gas station. She then called an Uber and fled the scene. She was later found by police in an Uber van in a nearby parking lot. LINK

Kakao Mobility has acquired a taxi company following new regulations designed to settle the conflict between conventional taxi service providers and ride-hailing platforms. These regulations act as a compromise for mutual growth between the two parties requiring ride-hailing services to purchase taxi driving licenses to develop and offer their services. LINK

NYC’s MetroCard’s flashy replacement was almost named ‘TONY’ (Which your humble curator wholeheartedly approves) The MTA seriously considered naming its new “tap and go” fare payment system “TONY” — but officials were too worried the MetroCard replacement’s moniker seemed too lacking in diversity. In the end, the team settled on OMNY. LINK